How to generate fitness API key 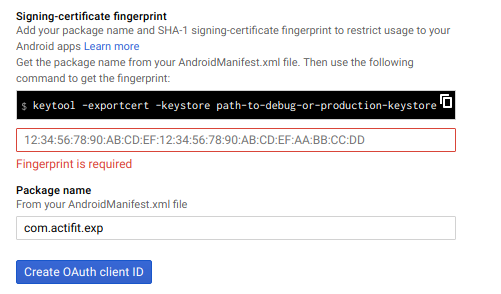 I am stuck here and not sure how to get the fitness API auth credentials and documentation is also lacking on how to generate Signed Certificate Key for CRNA Project.

I would also love if someone can guide me how to use Pedometer a bit in detail what I need to do with the generated credentails.

Edit: I was able to get the pedometer running in phone without google fir credentials by just copying the example from documentation through expo app in phone but when I generated apk using exp build:android the app didnt worked it got a popup for which account to use and didnt showed any data or yes for isPedometer available after building and using the apk.

So more light on how to do it would be awesome to have.

I looked through and found this issue Pedometer fails after building standalon app - #7 by milad1367
but I was not able to make it work as in that issue to there were no clear instructions given to make it work with CRNA so it gets confusing for a first timer. Thanks

hey @ms10398,
Run "exp fetch:android:hashes" in the project folder
and the key will be generated.
Expo Docs
the above link might be helpful to you
thank you