I was wondering if anyone knew why the Windows version of expo start --dev-client doesn’t seem to use the generic expo scheme (it seems to use the Android-specific scheme).

Here is an example of what I mean.

When we run the command on a Mac, it provides a link to exp+horizons://expo-development-client (which appears to be the generic expo scheme format for the dev-client) 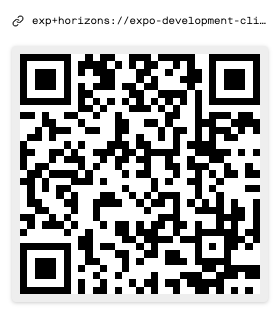 When we run the command on Windows, it provides a link to com.horizons_homes.dev://expo-development-client (which is our Android-specific scheme)
[I can’t include a second image because I’m a new user on this forum]

I assume it’s because Windows is usually used solely for Android development, however, it’s still possible to use a Windows dev-client to open the dev-version of the app that has been installed on iOS.

I’ve been forced to constantly enter the URL on the end of the deeplink manually in order to connect the dev-client to my iOS app. Is there a method that I’m missing in order to enforce the use of the expo scheme on Windows? It would definitely be more convenient if the QR code worked for both devices on Windows.