An unexpected error occurred when writing to SecureStore

facing the issue “An unexpected error occurred when writing to SecureStore” After upgrade to SDK 33
the issue is occurred on Android only, for iOS is working

Can you share the relevant code that’s throwing this error? Ideally in the form of a Snack, but a code snippet would suffice.

I get the same error via sentry for some users.

There were 2 errors encountered while processing this event

If any of you are able to create a reproducible example of this error, would you mind creating a Github issue for it?

Any news? It’s with any simple securestore call it crashes. SO I still have user experienced error on register to my app when i call SecureStore, only on android 21 & 22
Really annoying

It’s hard to help without a reproducible example. Is there a chance your value is over the limit? Size limit for a value is 2048 bytes

well, I’ve checked value is under 2048 bytes for sure, its hard to find error source because its only response a single line of message not much details even I have look at source code from https://github.com/expo/expo/blob/master/android/versioned-abis/expoview-abi31_0_0/src/main/java/abi31_0_0/host/exp/exponent/modules/api/SecureStoreModule.java but I find a temporary solution by using Platform.os == ‘ios’ ? SecureStore.setItemAsync(“value”) : AsyncStorage.setItem(“value”) its work fine

I have plenty of secure store use in my app, but i think no one is working right now for android 21 / 22, and I can’t really try without same old phone on android 21 / 22. 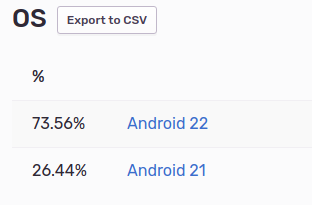 Datas are definitively under 2048 bytes, the longest one is a 100 character long token

This is breaking at the start i think, I’ll try to avoid the SecureStore for android 21 / 22
But I don’t really think it’s a good solution.

Never had this error until I upgraded to the sdk 33 also.
Maybe some stuffs have changed for the new 64 bits support, and something broke this for android 21/22.

SUGGESTION :
i didn’t find anything about this in expo, but it will be cool to put in app.json a minimum sdk version flag for android like :

its make sense, I will try later

Aha, it doesn’t work, it’s a suggestion of a thing that would be cool in expo ^^
Sorry for the misunderstanding

I have the same issue on Android 22. I’ll try excluding this Android version like suggests @ncailleux

I excluded android 22 and it works, thanks @ncailleux

How is that possible, as i said, it’s a thing i made up, i don’t think it’s a flag that can work damn

A Github issue was opened

Hope it can be fixed