No API-call from app after build, but everything's fine on emulator

I’m building an application with React-Native / Expo. Which is calling a NodeJS backend API.

When I download the application from the GooglePlay, and I try the application, the first button, is, indeed, unresponsive. I click on it, but nothing happen, no call, no response, nothing. I can not log anything from the backend, like if nothing happened. However, like I said, this is the exact same app, working properly on emulator.

Do you have any idea of what could happen ? The build are doing sneaky things or ?..

Here is a screen of the app (from GooglePlay), the purple button (which POST on /api/signup) is unresponsive : 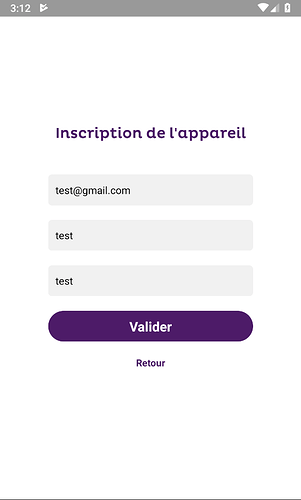 This exact same screen work properly on the emulator (which is calling /api/signup on the URL-backend server too).

I found the solution, I was registering user based on the deviceID with this code

And after building the app, getUniquerID() was catching an error.
Solved it by using Expo.Constants.installationId in each case (even with standalone app).