I have been following the guides to migrate from expo build to EAS.
After a long trial and error period to get everything working I’m a bit stuck at getting the EAS build server to run as expected.

the process hangs on the following execution:

I don’t receive any errors, it just stops and hangs until it times out at 45mins.

When trying to run it locally with the -local flag it fails due to certificates not being installed properly. But when building for simulator locally, everything builds fine, and the app runs as expected in the device simulator.

I have seen a couple of threads that have some similarities, but they always had some error to reference. I’m drawing blanks right now…

All help appreciated. Thanks!

Thanks for your response.
This is what I’m getting when running the visualizer.

you appear to be including the entire typescript library in your production bundle. is that intentional?

Disclaimer: I’m very much not a JS/Expo developer and have limited understanding of the npm package manager system. So no, that’s not intentional. I’ve just added the packages I require…

But it sounds bad now that you mention it

(and when I see the graph)

it seems like somewhere in your app you are importing directly from the typescript library. i’d recommend finding that and removing it. it likely is taking a very long time to compile your js bundle from scratch due to having to transform all of typescript

I see. Sounds plausible as a culprit since it’s timing out without errors and building locally without time limits

.
Found that one!!! line and this was the resulting graph. 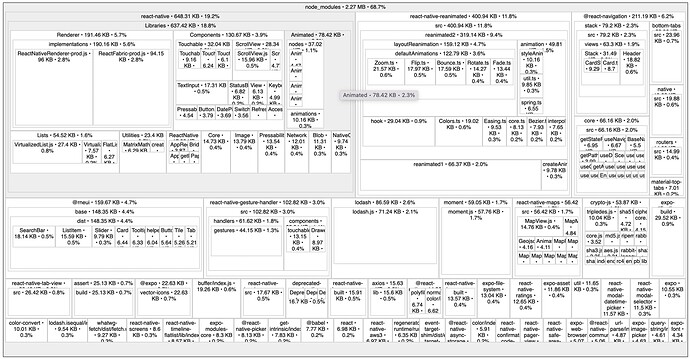 I’ll try another build and see what happens. A big big thank you in advance anyhow! Will mark as solution when confirmed!

That was it. Now it build.
Thanks for you help. Much appreciated