Before the update to SDK 47 our builds were running ok on both iOS and Android. However, since then, iOS builds are failing in the fastlane section of the build with the following error

Android is able to complete the build successfully and work as intended.

This is on the managed workflow, eas-cli version 2.7.1

So we believe we have found the issue although we need to do more testing.

It appears react-native-maps and the new way of using Firebase Analytics in Expo 47 are not working together in the same project. It would be great to get some more clarity on why this is the case

I think this is the discussion you’re looking for: 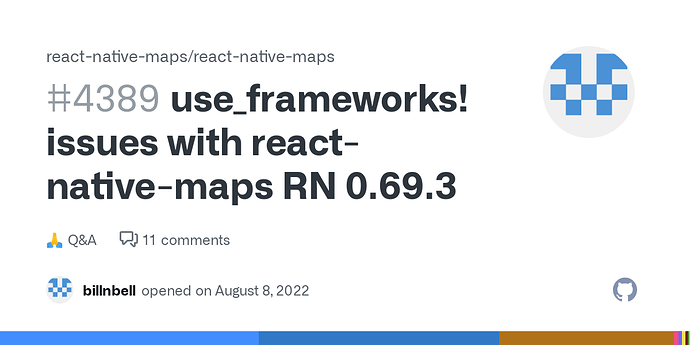 Summary What is the solution when using use_frameworks! As you know firebase is moving to this, and this one fails. See - for an explanation. invertase/react-native-firebase#6332 @mikehardy might h...

It seems that current versions of Firebase require “use_frameworks!”, while react-native-maps doesn’t yet support it (or the version you’re using doesn’t?). I just skimmed the discussion, but it seems that some people were able to get Firebase and RN Maps to work together.

Thanks, I’ve had a look at this before and was hoping something else was amiss but it looks like I’ll be implementing this at a later date.

It’s a shame because this is 2 key points of Expo 47 (upgrading react-native-maps to 1.3.2 and moving to the plugin format for analytics) and yet both don’t actually work together easily unless you have your own custom plugin on top

But react-native-maps 1.3.2 supposedly fixes the issue with “use_frameworks! :linkage => :static”, so in theory things should now work.

Added the following to app.json:

and I was able to build and run the app.

If I check the version of react-native-maps that’s installed, I see it’s 1.3.2:

Could you provide some more information about your setup (dependencies, devDependencies, plugins, etc.) so that I might reproduce the problem on my side?