Why is this happening?

I’m also getting this error, but not sure if it’s related… 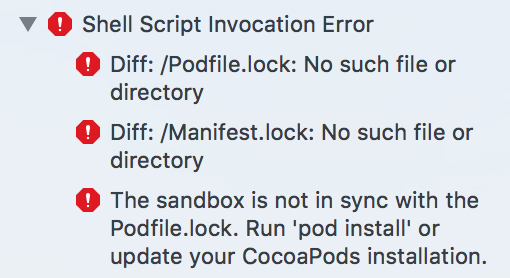 Are you linking a library or is this just a freshly detached project? If you’re trying to link a library and you had to run react-native link or make manual native code changes and it doesn’t have a podspec file, you’ll want to take a look at these docs: https://docs.expo.io/versions/latest/guides/expokit.html#changing-native-dependencies

Also, I would recommend either using yarn or downgrading npm to version 4.6.1 as there are still a fair amount of existing bugs when using npm 5 floating around.

Is npm 4.6.1 the recommended approach? Or yarn?

We suggest using yarn, but if you prefer npm I would install npm@4.6.1

Ok, I’ve give it another shot and report back!

No idea why it worked, but I deleted my Pods folder & my Podfile.lock file, then ‘pod install’. Every works now…

Glad you got it fixed. Hopefully it’s smoother sailing from here on out!

Sorry one more thing! I was having this issue last night. I’m now trying to install via ‘create-react-native-app’ → ‘eject’.

After ejecting & trying to run ‘pod install’, I get the following error with both yarn and npm…

Just reinstalled create-react-native-app and exp with yarn, but still get the same error after ejecting.

Are there compatibility issues with CocoaPods?

There shouldn’t be. Are you running the latest version of cocoapods? Trying to think of what else could be causing this.

Hey there, for others reading this thread, there was an issue with ExpoKit ios/2.4.4 combined with CocoaPods 1.5.0 (which was just released a week ago). I recently pushed a new ExpoKit tag, ios/2.4.8, which is compatible with the newer version of CocoaPods.