Learning expo using the TabNavigation app.
I’d like to change two things with respect to the default way the files are setup.

Thanks for using expo

Babel module-resolver is probably the best way to accomplish this. Maybe the official documentation can help you find an efficient way of doing it: GitHub - tleunen/babel-plugin-module-resolver: Custom module resolver plugin for Babel

@davepack thanks for the response.
If I move App.js into the src subfolder, What needs to change so that babel/expo know where to find it?
Not able to determine where this is defined.
If that can’t be moved, thats not an issue. Just wondering.

some comments after investigation

So you can’t really move App.js because it is referenced by a relative path in expo/AppEntry.js. I tried creating an alias in the module_resolver, but that doesn’t work.

using the module resolver plugin seemed straighforward at first, but looks like lots of opportunity to break.
I modified my .babelrc to look like. (the only stuff i added is under the plugin section)

and then I moved all the relevant source (except for App.js) in side the ./src folder.

This seemed to have the desired effect, until it got to a point in the TabNavigation App where it tries to use the AppLoading component. This in turn attempts to use the react-native ActivityIndicator component.
It attempts to add react by calling

where the intent is to search it’s own local modules. Guess i need a way to specify “search the current local directory first” in the “root” directive for module_resolver.
In webpack I was able to accomplish the same by instructing it to exclude the node_modules folder. Can’t see how to do that with babel module_resolver plugin. 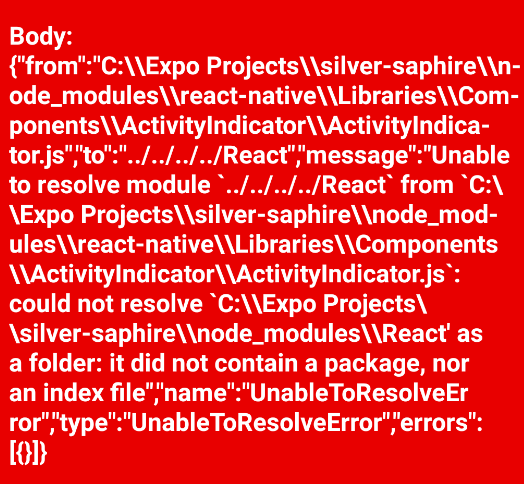 I guess the bottom line right now is that it doesn’t look realistic to move the source into a subfolder nor stop using relative paths.

Actually it looks like your issue is capitalization. Code should be const React = require('react');. Notice the lower case ‘r’ in the require. That should resolve at least that problem.

Yes, I’m aware of that. That code is actually from react-native. Check out the source for the ActivityIndicator component.

As I interpret it, it is looking for the local “React” folder, instead of the one in my node_modules.

I see. I apologize for not reading your whole post before responding. But you’re officially beyond my depth and it seems like this is not an expo specific issue but is perhaps more related to the babel plugin. Have you tried asking your questions there?

I haven’t yet. I thought to try here first because it seems Expo is very opinionated about the project layout and use of relative paths. Also because the build config is completely hidden (where i have previously set this config in other projects).

Thanks for taking the time to think on this.

Create an /src folder within your expo project folder. Then in the App.js you load your Main.js file from the /src folder

In the /src/Main.js you can call all your other React Native components from this folder with

While the structure is /src/stores/MyStore

If you have a lot of subfolders (all within the /src) and don’t want to go up 3 levels of folders like this:

You can use an alias to define a path like this:

thx for replying @deveagle
I implemented 1. already in the last couple projects i did. this works well.

for 2. I thought about a custsom “your-alias” for module-resolver but wanted to avoid it if possible. I guess for the moment, this is the only way to do it.