I’ve recently been having issues when building my app, but only with the Android build and only about half the time. I’m not sure I can do anything to fix the issue since:

Here’s a screenshot of the error in the Expo.io UI: 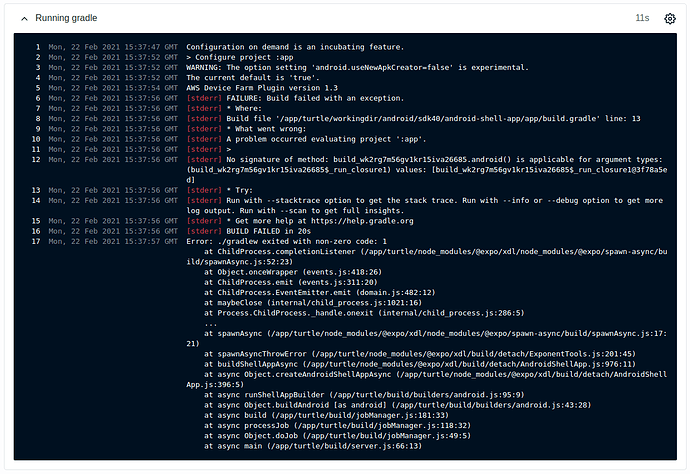 Any help would be greatly appreciated. Thank you!

Actually, I ran two more builds since this post and it seems like the Android build fails all the time when launched from my CI server.

The error message does not help me to figure out what’s going on though.

can you share a link to your build, please? only members of your team and expo employees will be able to actually access the page

And the logs (that I can see anyway) are here: Log In — Expo

Same command was ran, but from my local machine. I figure it might help in understanding what’s going on.

that’s odd. what does your ci server do differently than your local machine?

Nothing that I can see. The CI is Gitlab and the job runs in a Docker image (node:15.6.0) same as my local. The Expo CLI is running from the local node_modules on both machine (via yarn expo build:android).

The only difference I can see is that we add gosu in our local node image to handle file permissions during local development. Here’s the Dockerfile and entrypoint:

Is there anything I could run on both machines that could help with figuring out what’s happening?

i’m having a hard time narrowing down what would be causing this, and it looks like it has only happened to you and one other user (with ci in their username).

could you try building with the expo build:android with the --no-publish flag on ci? that will help us narrow down if it is somehow related to the publishing step

I have confirmed a few things while doing that build with --no-publish set.

Here are the results of the build command in my CI, which resulted in the above log:

builds that are failing have version code outside of range of 32 bit integer (eg 20210226124), builds that work have values 10 times smaller that are just on the edge of that range. We seem to generate build.gradle correctly, but it seems gradle does not support values like that.

You need to use lower numbers

Wow, I can’t believe I didn’t realise this might be the issue… I’ll see if I can’t review our versioning strategy to prevent this kind of error.

I was going with a “YYYY.MM.DD.GitlabBuildNumber” strategy to automatically handle guaranteed unique versions for each build, without having to bother with semver. Android requiring build number to be actual integer I end up with these very large integer.

I’ll validate the solution and close this once done. Thanks.

The version code was a good thought, but it seems it was not the issue. My latest build still failed: https://expo.io/accounts/blitzclock/builds/6b7a5b1d-9f01-4097-954d-d69a1dbb06ef/logs.

Edit: Ignore that, looking though the manifest of the build, I can see the build number is still way too large. Seems like my CI generates version codes differently than my machine somehow. I’ll dig into it, but for this topic, the issue is solved. Thanks a lot for the help.

To validate the version code issue, I sent this build manually (by running on my machine rather than my CI) Log In — Expo. The strategy to generate a version code is the same as the failed build in my previous post. More specifically, it’s 210309345 and the build worked.